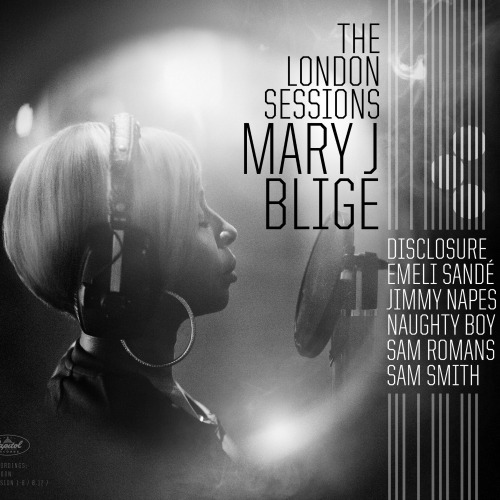 I couldn’t wait to sign on here and blog about Mary J. Blige’s latest album “The London Sessions”(hence why I am posting this at 9am lol) I have watched various interviews that she has done in the past couple of months leading to her album release and have been slightly intrigued. I was curious to hear the “different direction” she decided to go in this time around after being influenced by the sounds and artists coming out of London but I was skeptical that this album would sound any different from her earlier ones. Mary is always consistent when it comes to making songs about heartache and resiliency but I figured that the album would have a couple of upbeat tracks like she has done in the past with “Family Affair” and “Just Fine” but the rest would be songs about getting through heartbreak, finding strength from within and loving yourself over soulful R&B tracks. After listening to the album however, I was pleasantly surprised. Mary J. Blige took a chance and tried something completely out of the norm for her by working with UK mega producers such as Disclosure and Naughty Boy and having popular UK artists such as Sam Smith and Emeli Sande co-write on tracks. The result is something I like to call “electrosoul”. The majority of the tracks have a electro dance vibe and 808 beats to match but Mary brings something that few artists today can achieve: even on a dance track, she still manages to stand out over the catchy tunes because of her unique voice and candid lyrics. Although the entire album is amazing, here are the tracks that stood out for me:

Track 3- Not Loving You

In the chorus Mary sings, “There’s only so much I can do. If you’re not loving you” It is a very powerful song about someone who can’t seem to pick themselves up from the pain and struggle that life has brought their way. The lyrics are reminiscent of classic Mary hits but this time around, she’s not the one that needs the support but instead is trying to open someone else’s eyes. I love this track because the lyrics are simple but powerful and stir something deep within.

This song produced by Disclosure is classic Mary with a modern feel. Although Disclosure’s signature sound is heard throughout the song, Mary’s sultry voice gives the track a refreshing twist . “Right Now” is definitely the strongest and most out of the box out of all the singles she’s ever released and bridges her old school flair with today’s heavy drum bass driven tracks. She sings “They don’t see what it used to be from the outside…this can’t be what it used to be from the outside” The only thing I see is this song reaching #1 on the charts 🙂

Here is another uptempo track from Mary (I am so not used to saying this in reference to Mary lol) As soon as I heard it, I felt like I was transported back into the 90′s when my friends and I screamed the lyrics to “Show Me Love” at the top of our lungs. Mary shows that she knows how to get down and party like the rest of us. I want her to perform this track live on stage and do the “footwork” dance so I can really get my life!

UK singer/songwriter Emeli Sande flexed her writing chops on this track which resulted in a soulful track that appeals to Mary’s core fan base but the melody is a slightly different turn that highlights the pain in her voice. She sings “Winter took most of my heart, spring punched in my stomach, summer came looking for blood and by autumn I was left with nothing” The metaphors expressed her sorrow and despair so eloquently and made me want to take another listen.

Track 12-Worth My Time

Mary ends the album with a ballad that shows us that even though she may have switched her sound up this go around with “The London Sessions”, she is and always will be the queen of hip hop soul. In the chorus she sings “I won’t give up if you make it worth my time” After listening to this track and the rest of this album, I can honestly say that listening to this album was definitely worth my time and I can’t wait to purchase it on iTunes so I can put it on repeat on my iPhone:)

Make sure you purchase the album in stores and online in the U.S on December 2nd, 2014 . If you live in the UK, you can purchase it a week early on November 24th (lucky!) Click on the links below preorder the album on iTunes and/or Amazon:

You can stay up to date on all things Mary J. Blige by following her on Twitter, (@maryjblige) Facebook (https://www.facebook.com/maryjblige) and by checking out her official website (http://www.maryjblige.com/london-sessions)

Make sure you let me know what you think in the comments section below.

Disclosure statement: I participated in the Mary J Blige The London Sessions album review program as a member of bLink Marketing Network. I was provided a free album to review but all opinions are my own.

I participated in the Mary J Blige The London Sessions album review program as a member of bLink Marketing Network. I was provided a free album to review but all opinions are my own.