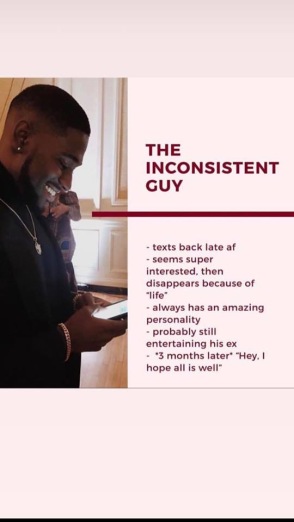 Good Morning! I’ve realized that a lot of the inspiration behind many of my recent posts have come from something I’ve witnessed in person or online and today’s topic is no different. One of my FB friends shared a post that highlighted the 7 different types of toxic men in relationships. You have the good guy, the player, the inconsistent guy, the no initiative guy, the insecure guy, the emotionally draining guy and the Netflix and chill guy. I was laughing so hard to myself because I have definitely dated a few of these types of men which I will get into later but right after I shared the post on my page and saw some of the comments to it, they made one for 7 (actually 6) different types of toxic women including the curve queen, the heartless girl. the pick me, the user, the head over heels girl and the insecure girl. I’m not sure if it was because its more difficult to be objective when thinking about yourself or because I didn’t see myself as a “toxic” type but after rereading and being completely honest with myself, I saw that I was a mixture of two types and because of that, I may be part of the reason why I haven’t had success in past relationships.

As far as the types of toxic men I’m attracted to, I usually attract the inconsistent man because I’m pretty chill at the beginning and when the guy seems to show some interest, I start falling for him and it seems that at that exact moment that I catch feelings, he decides to fall back. It happened with the last guy I was seeing and it’s happened in the past with guys I was into. It has been so frustrating and I initially wondered what exactly was it that I was doing wrong and it took me a minute but I was able to figure out what my issue was. Somewhere in my subconscious, I am attracted to men that are afraid to commit. When I start having feelings for a man and he falls back a bit, instead of taking the hint and falling back after realizing that he wasn’t really as interested as I initially assumed or we weren’t on the same page as far as what we wanted from each other, I would see his nonchalant ways as a challenge of sorts and try to persuade him to want what I wanted. When that didn’t work, eventually I would fall back and then the guy would appear to show real interest once again and the vicious cycle continued. A lot of this stemmed from my own insecurities but also because of my pickiness which has led to toxic patterns and  behaviors that I exhibit in relationships that led me to the inconsistent men in my life. 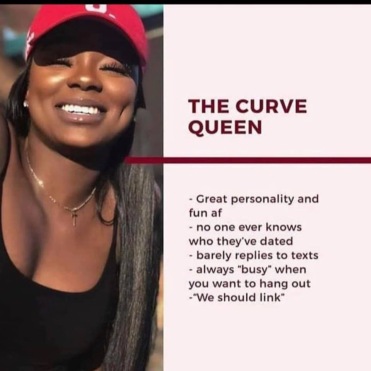 I realized that I am a mix of the curve queen and the head over heels girl depending on who approaches me. If I am not really into a guy, I can be the curve queen because I’ll suggest meeting up but never actually put the effort into making plans lol. I also make excuses because I don’t want to hurt the person’s feelings even though I am not interested at all in talking or hanging out with them. On the other hand, when I am into someone, I am the head over heels girl because when I am into someone, I give them my all. I ignore red flags (as you can see from me being attracted to the inconsistent guy lol) and I love the idea of love but haven’t always been patient enough or loved myself enough to not settle out of fear of failing and the fear of loneliness. After the last situation went sour, I decided that I have to be completely honest with myself, by myself and work on my mental, spiritual and physical (well I’m not quite there yet with the physical lol) in order to eliminate the toxic habits within myself that attract the toxic temporary men that may try to enter my life. They may have been able to come through before but now they will get denied at the first sign of flakiness and wishy washy behavior! 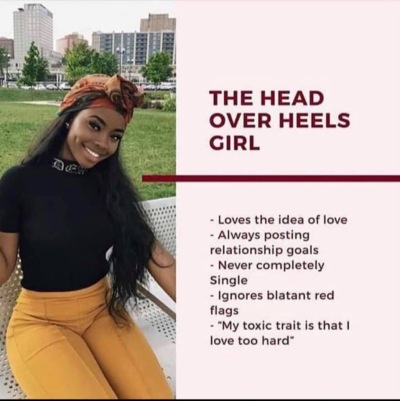 Which type(s) do you attract and which type(s) do you fall under? Let me know in the comments. I know its difficult to see your behaviors as toxic but you will learn a lot about yourself when you are completely honest with yourself. New post coming Friday. Until then, remember to love and live luxuriously!